Monday 21st May – a sharp scratch and count down from ten….

Following on from the huge and delicious last meal before surgery in Cornwall, Ally, Filly and I had a quiet night at home (the former snoring loudly while I stared at the ceiling for the largest portion of the night, unable to sleep.) Then, suddenly it was the 21st May and Ally and I made our way to hospital, leaving Filly in the capable hands of my parents. We arrived at 8.30am and trudged up to ‘check in’. It was most definitely a trudge, or Ally could probably describe it as a drag, I was not keen, to say the least. We arrived on the ward and as my name was called I burst into tears, 2 nurses immediately came to me, put their arms around me and took me to sit down so that I could dry my eyes and gather myself.

We spoke to an anaesthetist and my surgeon popped by to draw on me so that she operated on the correct side, I was booked in for a full left side mastectomy and lymph node clearance (all my lymph nodes in the area – underarm and collar bone, were being removed). The nurses gave me a gown and some rather fetching surgical stockings, and then we waited. Unfortunately we waited from 8.30am until 3.30pm, it was a long day and I felt dehydrated, hungry and very weary when my name was finally called. It was a short 2 minute walk to the theatre, I had a good cry when we reached to door and they prized my hand from Ally’s. Just before we went through the doors I gave Ally something that I’d written for Filly, it was extremely difficult for us both, actually that’s a massive understatement, it was heartbreaking but it was something that needed to be done, just incase… 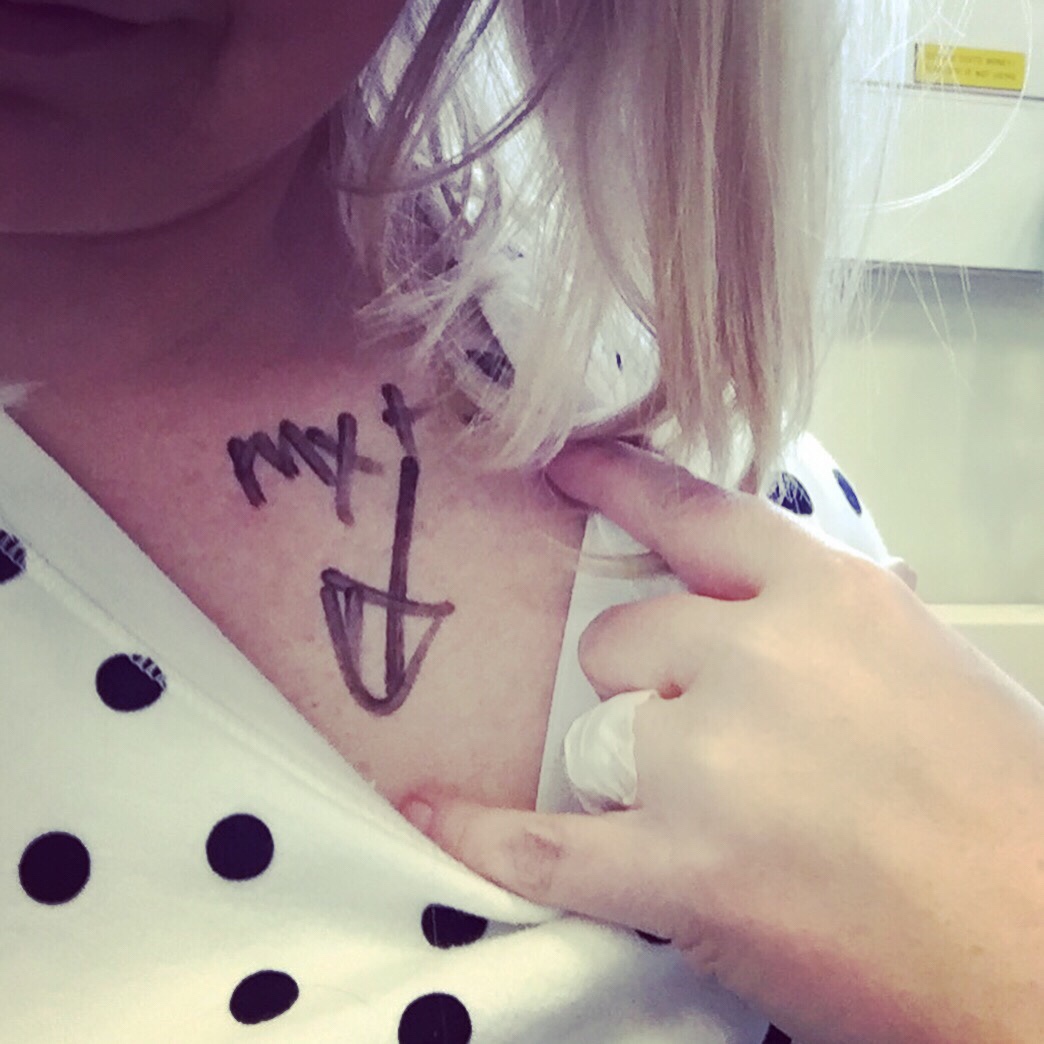 Despite my crappy veins and thanks to the numbing cream I’d asked the nurses for I didn’t feel the anaesthetist put the cannula into my arm and and so the next thing I knew I was being asked to count down from 10 and watching the oxygen mask going over my face.

I woke up in recovery and was asked the usual questions, but I was very drowsy and fell back to sleep several times. When I finally woke up properly, I was told that the operation had gone well but that I had taken longer to recover than expected due to my heart rate being a bit unsteady for an extended period of time. At 7pm I was sent up to the ward where dear Ally had been waiting patiently for far too long. Ally stayed with me for as long as he could but I sent him home once I had settled; he’d had a long, worrying day and I knew my mum had cooked him a lovely dinner. I tried to rest but my mind was whirring so I watched back to back episodes of This Country on my iPad. It was a slight error as every time I laughed I could feel the drain that was in my side move and bubble.

The drain had been on my mind since I knew I was going to have a mastectomy and researched the operation. I had explained my concerns and worries to my (second) surgeon and she was really kind and said that if there was less than 100mls of fluid after 24 hours then she would take it out before I was allowed to go home; usually patients keep them in when they go home and are then removed by a district nurse when there is less than 30ml fluid in 24 hours. I could feel it but I tried not to look at it too much and thankfully I was given a ‘drain dolly’ which is a small bag to pop the drain into when walking around. The bags are all made and donated by kind and talented people, to those people – thank you, you made it a lot easier.

I didn’t sleep very much as I was under close observation – my temperature was high (I think due to the fact that I was next to a window and it was sunny) and so was my heart rate so I had my obs taken every hour through the night. I didn’t have a lot of pain at any point but I had very little use of my left arm, I knew that would be the case though and I had read about the physiotherapy that I could do afterwards to bring back as much movement as possible.

The morning passed fairly quickly, I read some text books and magazines and spent some time replying to lots of lovely messages from friends and family, and then it was visiting time. Ally popped in with some food, unfortunately the only thing I was prepared to eat on the NHS menu was a banana, so I was famished after not eating for almost 48 hours. My parents came in next, after Ally took over Filly care. I can’t imagine how much of a struggle and how scary it was for them to see their daughter going through all of this so I’d made an effort to get dressed, do my hair and put some make up on so that they could see that I was doing ok, unfortunately I did this one handed so I more than slightly resembled a lunatic clown above anything else! They bought lots of lovely treats from our local farm shop, who also happen to specialise in plant-based foods. My parents couldn’t stay long as we had decided that Filly would go and stay with them for a few days post-surgery so that Ally wouldn’t have too much to cope with and not knowing how mobile I would be. Once my parents had left Ally came back up to sit with me, by this time it was heading towards the 24 hour post-surgery drain deadline.

Ally and I were both nervous and when the drain was emptied there was 120mls, thankfully, after pleading with the nurses and a quick call to my surgeon it was agreed that the dreaded drain could come out and I could go home. Just as the nurse was ripping out my drain (I am certain that she didn’t rip it out but it was fairly uncomfortable and a very odd sensation) my lovey friend, Mrs P arrived. She found it hilarious to listen to my whingeing when the poor nurse was trying to remove the drain. After this I was given another 2 paracetamol and sent on my way home.

The journey home in the car was horrendous. I really didn’t have much pain at all when walking or sitting without resting on the back of a chair or bed, but as soon as I needed to sit back in our car I realised quite how big the surgery had been. All of my left side, back and arm felt extremely painful, bruised and swollen, I’ve since learned that this is due to some nerves being moved or cut during the lymph node removal. By surrounding me with pillows we eventually made it home. I had a quick cuddle with the dogs and very happily got into my own bed (surrounded by more pillows!)

Another cancer treatment milestone ticked off, and thanks to a brilliant surgeon (she really is a superstar), kind and efficient nurses and our NHS it really wasn’t as bad as I had imagined

View all posts by thelastmealbeforechemo